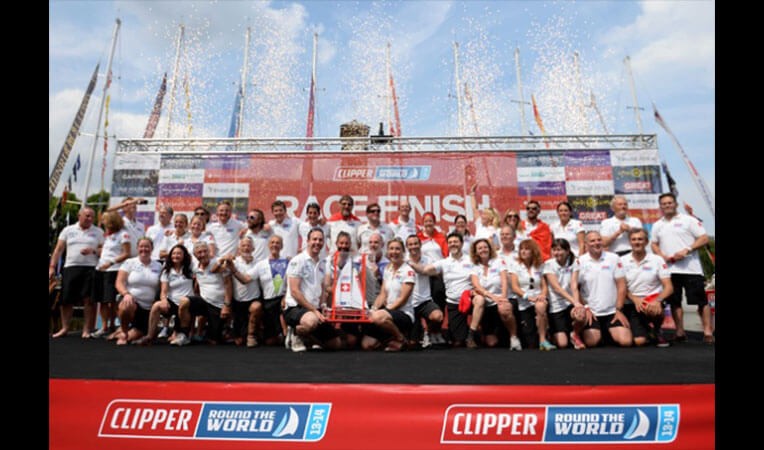 Vicky took on the world, and succeeded!

Vicky Ellis, one of OYT Scotland’s skippers, has recently completed her circumnavigation of the globe with Clipper Ventures as the third-ever female skipper in the race. Following in the steps of our CEO, Nick, and countless OYT/C skippers before her, Vicky had the time of her life. Vicky is pictured below with her Switzerland crew, along with a story published from the Clipper Race website.

We here at OYT Scotland are very proud of Vicky and can’t wait to have her back on our boats!

Picture and story reproduced with the permission of Clipper Ventures, http://www.clipperroundtheworld.com/

Race partner Swiss Sailing has congratulated Team Switzerland for its achievement in finishing fifth in the Clipper Race.

Skippered by the race’s sole female skipper, the UK’s Vicky Ellis, the international team finished solidly on 113 points, 20 points behind fourth-placed Derry~Londonderry~Doire, and nine points ahead of Old Pulteney.

And at the 69th Sydney-Hobart Race, Bristol-based Vicky won the Jane Tate Memorial Trophy for being the first female skipper over the line in the famous race.

During their circumnavigation, the team raised money and awareness for Mercy Ships, a hospital ship charity. A chilly naked calendar photoshoot in the North Pacific and the waxing of a male crew member’s legs in Australia were some of the more unusual fundraising campaigns.

The team was awarded with 25 Mercy Ships pennants in total, with each pennant symbolising a life that will be saved through surgery carried out on a hospital ship. Each pennant represented $1500 raised, meaning the total raised so far is $37,500.

Vicky, the third female skipper in the history of the Clipper Race, said getting the whole crew around the world and back to London in one piece is one of her greatest achievements but it had been her biggest pleasure too.

“I’m so, so pleased and proud of the team, this is an ambition of mine finally realised. The Mercy Ships pennants flutter on the side rail and they remind us that this year of self-achievements has also made a difference elsewhere in the world.

“Congratulations team, we just did something amazing.”

National governing body Swiss Sailing President Vincent Hagin said the Switzerland boat was a great opportunity to raise the image of sailing and the country within Switzerland but also around the world.

“Team Switzerland had a great race. This success, thanks to a multicultural team of experienced sailors as well as less experienced, helped Swiss Sailing make a big step forward in the Swiss world of sports events.”

In a moving speech to the crew at Saturday’s prizegiving, René Lehmann, Director of Mercy Ships Switzerland, paid tribute to the crews’ efforts in fundraising and increasing awareness of Mercy Ships’ mission and activities.

“This crew has been fantastic, they have shown so much enthusiasm and initiative, and we feel they have become part of the Mercy Ships family. We are very grateful to all of them and to all those who contributed to the Saving Lives Every Leg initiative.

“The crew has raised enough money to help to save the lives of 25 Max-Fac patients, who undergo several complex surgeries on board the largest private Hospital Ship, the Africa Mercy.”

Elsbeth Baxter, the Head of Development and Sport at the Swiss Embassy, thanked the Swiss and multi-national crew for their efforts in representing Switzerland around the world. “You have realised a great achievement. Thanks to the skills of Vicky and the crew you have succeeded in sailing safely round the world, achieving an excellent result of which you can be proud. Thank you for representing Switzerland so well.”

Want to follow in Vicky’s steps? The Clipper Race is now accepting skipper applications for the 2015-16 edition of the world’s longest ocean race. If you think you have what it takes to lead a team of amateur sailors round the world in one of the toughest, most rewarding jobs on the planet.