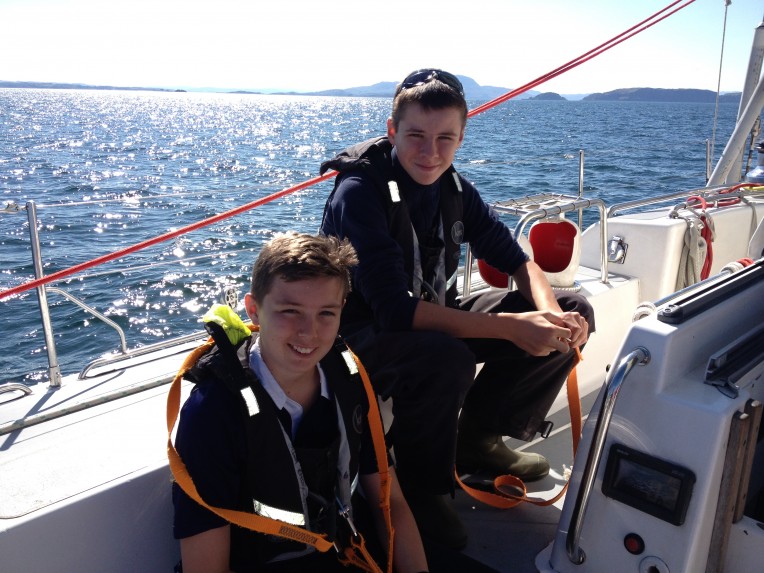 “The Best Week of My Life”

“This year in school I was given the opportunity spend a week sailing a seventy two foot racing yacht built to circumnavigate the globe the ‘wrong way’ against all winds and tides, with Ocean Youth Trust Scotland (OYTS) from Oban to Greenock. In return, I would gain my silver Duke of Edinburgh award.

On seeing the yacht for the first time, its reflection shimmering in the water, I was stunned. It looked majestic. Mesmerising. Magical. Just before I climbed the boarding ladder, I stopped, looked up and took in the mast towering ninety feet above me, gently rocking with the boat in the breeze. There was an atmosphere of anticipation and uncertainty of what to expect as we left Oban marina to start our expedition.

Our first role as part of the crew was to help hoist the main sail all the way up the ninety foot mast. With around fifteen of the eighteen-strong crew helping, I didn’t expect the sail to be as heavy as it was; or so difficult to get everyone to pull on the main sheet at the same time. That was our first lesson in team work.

The moment I had been waiting for and the one I think I will always cherish was when I got my first shot at the helm of the boat; I felt the weight of responsibility of being given control of such a big yacht. It took a while to get accustomed to how the boat reacts to every wave and current, constantly trying to dictate the course of the boat; even in calm waters you can feel it.

After dinner, We continued to sail into the night towards Bangor, Northern Ireland. The sun vanished and darkness arrived. When I got on deck, the sky was the darkest I had ever seen. Despite this, the stars were so numerous, it felt like we could see the whole universe.
It was amazing. A night I will never forget.

Several days and adventures later, our destination was the Holy Loch sailing from the Isle of Man. We hadn’t bargained on a gale force nine storm with sixty mile per hour winds and six meter high waves. This was another challenge that I was really up for. Perhaps there is a slightly insane corner of my personality that craves danger.

Once again I found myself standing at the helm only this time through the storm. I looked down and saw the wind speed rising. As the waves were building, I felt that I was being trusted with the boat and everyone on it. As the sea and sky grew angrier, I was dismayed at how hard I had to work to try and keep the boat going in roughly the right direction. The waves were capable of picking the boat up and turning it completely in the wrong direction. This made me realise very quickly that I had to be very alert to all the waves around me and had to anticipate what the waves were going to do to the boat before they hit. The watch leader who was supervising me at the time said that it normally takes years for people to know how to anticipate what the waves are going to do to the boat as well as I was doing so. My captain also congratulated me on how well I was doing, saying that I was ‘a natural’. Can I admit here that I felt a little bit of pride?

There were moments that almost engulfed me in terror. The wind howling in my ears and waves constantly coming over the side of the boat and soaking me. The boat tipped right up on its side and parts of the deck underwater. The screams of everyone else on deck. I just had to keep focused. It got to the stage that the waves, the wind and the screams didn’t even register. At times, it felt like the wind and waves were toying with us, lifting our little yacht up out of the water, playing with it like a little boy with a bath toy. But I felt like I was playing too…surfing in fact! It was utterly thrilling, despite being hard work. Our shift flew by in a blizzard of constantly trimming the sails to the best shape for the wind.

Whenever I got off watch, my adrenaline was still pumping and it took a while for me to calm down enough to even try and get some sleep. I also started to notice the salt from the sea on my lips. But as soon as I got into my bunk the motion of the sea put me to sleep almost instantly.

There were many other adventures: a shift at the helm sailing round Ailsa Craig when the wind caught all three sails, forcing the boat at ninety degrees to the water, putting the boom and part of the main sail under the waves and I was amazed that no one fell off the boat; reaching the Holy Loch in thirteen and a half hours, a new record for OYT Scotland; and our last night on the boat when everyone helped with dinner and there was music playing through the boat. A prefect end to an incredible journey.

Inevitably, we spent the final morning cleaning the boat and getting it ready for the next batch of rookies. But somehow, what would have seemed a drudge before to me, seemed now like fun because I was doing this with my shipmates and comrades. We had been through this incredible odyssey together and even mundane tasks felt heroic.

We said our final goodbyes to the crew and headed for home, exhausted, inspired and fulfilled after an amazing week that I will never forget. Oh, and I did get my Silver Duke of Edinburgh, but I felt as though I had already got more than I could have hoped for.”