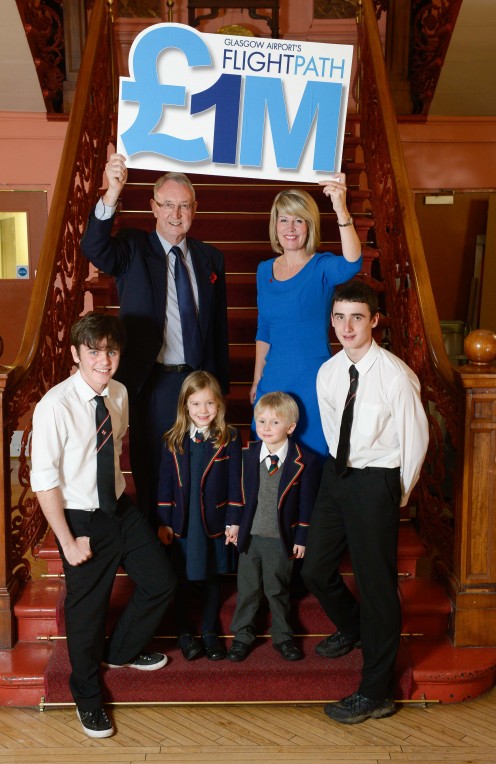 Pupils from Drumchapel High School took centre stage as they presented to community groups, charities, local politicians and members of staff from Glasgow Airport gathered at the FlightPath Fund’s annual celebration event at Kilmardinny House in Bearsden on Friday 6th November. Taking part in the event were Drumchapel pupils Tyler Brown and Dean Matchett, pictured above, with Archie Hunter and Amanda McMillan from Glasgow Airport and students from Bearsden Primary. A group of S5 and S6 Drumchapel High School pupils were supported by the FlightPath Funding  to take part in a voyage with OYT Scotland.

Established in 2010, the FlightPath Fund was set up to provide grant assistance to local organisations working in and around the airport community. Since its inception, the fund has given donations to over 350 charities and community groups in Renfrewshire, Glasgow and East and West Dunbartonshire with a focus on improving education and employment, as well as the environment.Glasgow Airport’s FlighPath Fund reached a major milestone this year after awarding more than £1 million to over 350 local charities and community groups, including Ocean Youth Trust Scotland.

“Our voyages offer young people a truly unique and life changing opportunity. The two voyages, supported by the FlightPath Fund, saw students from Drumchapel High School embark on a week-long voyage in September and a group of young people from Renfrewshire Children’s Home in October. Both voyages were full of learning and self-discovery. Each group had a truly fantastic experience, and managed to achieve things they never imagined they were capable of – changing their outlook on what the future could hold.  We’d like to thank the FlightPath Fund for their fantastic support. Tyler and Dean did a great job today presenting at the event and we are so pleased to see how they have benefited from their voyage.”

The FlightPath Fund committee operates independently of the airport and is chaired by former KPMG partner, Archie Hunter. The committee meets every two months and also consists of an elected member or representative from each of the four council areas under the flight path.

Managing Director of Glasgow Airport, Amanda McMillan said: “We set up the FlightPath Fund to ensure that the local communities around the airport share in our success. The fact that it has now surpassed £1 million is testament to the huge amount of energy and enthusiasm that the independent committee puts into operating and managing the fund.

“Five years ago we had no idea how well the Fund would be received or how many lives it would touch. The committee has helped to shape its fortunes, making the Fund the excellent and reputed resource it is today.  On behalf of the airport I would like to thank Archie and all the committee members for their hard work and ongoing support.”

Archie Hunter, chairman of the FlightPath Fund said: “Glasgow Airport’s FlightPath Fund is truly unique, and it is inspiring to see how it has evolved over the past five years. It has been very encouraging to hear from some of the groups who have benefitted from the fund since its inception. Listening to representatives of these organisations speak passionately about the work they do makes us even more determined to continue supporting our communities. I am looking forward to continuing to work with the fund over the years ahead.”