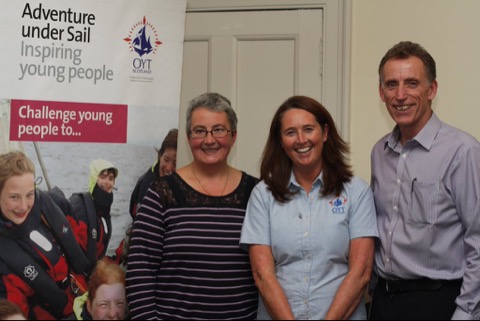 A unique charity challenge to relive the literary classic Kidnapped  by Robert Louis Stevenson was launched on 29th October at the Royal Overseas Club, Edinburgh. OYT Scotland’s Cath Coombs, volunteer and Edinburgh Shore Group member, and Pam Shaw, Fundraising Officer are pictured above at the launch with adventurer Alan Rankin.

In the summer of 2016 two intrepid adventurers, long-time OYT Scotland supporter Alan Rankin and Willie Gibson, are to relive, 130 years after its publication, the Scottish literary classic Kidnapped by R L Stevenson. The charity challenge will see the duo sail 500 miles from South Queensferry on the Forth, northwards and around Orkney then down the west coast landing on the rocky island of Erraid near Mull. From there they will swap sailing boots for walking shoes to hike and run the 260 miles back to Edinburgh.

Penned in 1886 by Robert Louis Stevenson, Kidnapped tells the enduring tale of David Balfour’s kidnapping and subsequent adventure as he is smuggled around the coast of Scotland, surviving ship-wreck, witnesses the infamous Appin Murder then fleeing the Redcoats with Alan Breck Stewart across Scotland to South Queensferry and on to Edinburgh to claim his rightful fortune.

The challenge will leave from South Queensferry sailing non-stop around Orkney then passing Cape Wrath and passing west of Skye, rounding Tiree and landing at Erraid. From there the overland route crosses Mull, Morvern, Appin, Glencoe, Rannoch Moor, Trossachs, Hillfoots and returning over the Forth to South Queensferry and following the story to finish in Edinburgh. The overland route leads to many high tops and will take in 42,000 ft of ascent, nearly one and half times the height of Mount Everest.

Alan and Willie, veterans of adventure races and long distance challenges are familiar to tackling extreme adventures. In 2006 Alan became the first person to sail and cycle around Scotland and in 2013 he sailed singlehanded around the UK and Ireland stopping to run a 10k at ten ports along the way. Willie has competed in more than 20 mountain marathons, tackled ultra-distance cross Scotland routes and completed the punishing 50 mile Ramsey Round. Both are veterans and multiple winners of one of Scotland’s harshest adventure races the Scottish Island Three Peaks race.

Alan said. “Kidnapped is one of my favourite books so to retrace the steps and relive the adventure seemed a good idea and it will be a ‘first’ as we don’t think anyone else has ever attempted it. The trip combines my two passions of sailing and being in the hills plus connects with a story I have read more times than I care to count.”

Willie Gibson said. “We make a good team, Alan is in charge of the sailing leg and I will lead the overland navigation and routing. We plan to keep as close as possible to the route described in the book. We will be wild camping and taking accommodation along the way in much the same way as the books leading characters David Balfour and Alan Breck Stewart.”

The challenge has a low carbon ambition on both sea and land. Their yacht will utilise; wind, wave and tidal forces to sail and renewable energy generated from on-board solar panels and wind turbine for all on board electrical power required for navigation, communications and lighting requirements.

Alan and Willie will have assistance from Gordon Jack and Richard Marshall helping to take shifts over the long non-stop sailing leg. Both Gordon and Richard have extensive sailing experience and are past Scottish Islands Peaks Race competitors.

Alan added. “We are looking to recreate the great tale. In the book their ship is wrecked, David and Alan witness murder and flee for their lives pursued by Red Coats. We plan to do none of these things!“

We wish Alan and Willie fair winds on their amazing adventure- and we’ll be reporting on their progress through our social media sites.

The challenge will take place in June 2016 and is expected to be completed within 16 days. Donations can be made online from www.kidnapped130.com/ . Follow updates on Twitter @kidnapped130 or on Facebook.