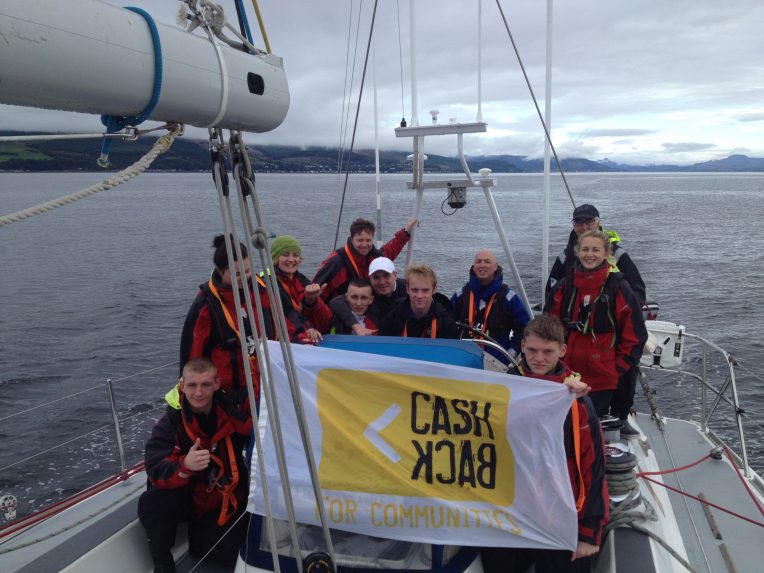 Their first port of call was Campbeltown, with further night stops in East Loch Tarbert and Rhu. Taking on the all the challenges of sailing a 72 ft yacht, they learned to navigate and steer the boat, hoist and drop the sails, tie knots and cook for the whole crew.

From the very start, the young crew worked hard to achieve the goals they set themselves. They said:

“When I first came on, I was dreading it, but having done it, I am glad I came.”

“I worked on my team building, and my self-confidence improved.”

“I felt good about everything I did- it was an enjoyable experience and I’d like to do it again.”

“I feel proud of myself and feel a real sense of achievement of staying until the end of the voyage.”

With future goals of finishing a hairdressing course, becoming an OYT Scotland bosun, getting a job, and learning to drive, the confidence gained and skills learned during the voyage will make a difference whatever the future holds in store for these young people.

Also taking part in the voyage were group leaders Carol McIlwaine and Paul Holland. Paul spoke about voyage: “It was a difficult start for the young crew due to an unavoidable delay and the unfamiliar surroundings of a yacht. Over the next few days they settled into a determined hard working, capable and often hilarious team.  You could see them start to relax, unwind and grow in confidence. The experienced sailing crew from Ocean Youth Trust Scotland were patient, supportive and good humoured.  It was a truly memorable experience and hopefully just a taster of more to come for them.”

All members of the crew received the Royal Yachting Association’s Start Yachting Level 1 Award, and the SQA’s Level 3 Speaking and Listening qualification.

A very special thanks goes to the sea staff and volunteers who helped make this voyage a success!