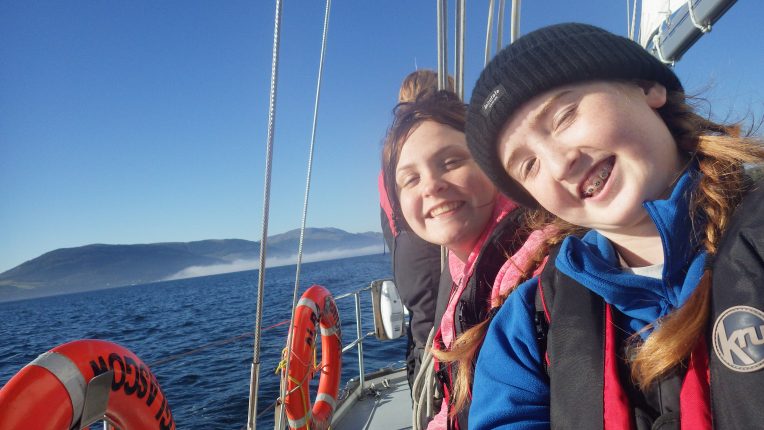 The Big Lottery Fund has announced today that £147,310 funding is being awarded to Ocean Youth Trust Scotland to provide adventure under sail for young people. The grant will be used to fund the CORAL project, a three-year national project to provide a much needed week of respite for 270 young carers in Scotland.

A total of 27 young carers’ groups from across Scotland will participate in the project, named CORAL (Carers on Residential Adventurous Learning) with ten young carers and two adult group leaders on each five-day residential voyage. The young carers will help plan the voyages, and will fully contribute whilst on board, with duties including navigating, cooking, watch-keeping, and boat-handling. Activities will build team-working, problem- solving, time-keeping and communication skills.

“We are absolutely delighted to be supported by the Big Lottery Fund for our CORAL project” states Chief Executive Officer Nick Fleming. “We have previously worked with young carers groups and have had great success having them on board, but this project will enable us to reach out to many more deserving young people.”

Big Lottery Fund Scotland Chair, Maureen McGinn, said: “I am delighted that Ocean Youth Trust Scotland has been successful in securing a Big Lottery Fund grant. The funding will make a big difference where it is needed most and I wish the OYT Scotland every success as it goes on to develop and expand its project for the benefit of their local community.”

Voyages with OYT Scotland’s CORAL project will aim to give young carers a chance to be with young people their own age and have a respite from their caring duties. According to research carried out by the Carers Trust in August 2016, 40% of young carers have not told their friends about their caring roles at home, leaving them to feel isolated. Many of these young carers feel that their friends at school do not understand their home situation. Louise Morgan, Young Carers Development Manager at Carers Trust Scotland said: “Young carers will benefit enormously from these voyages – not only are they getting a break from the caring role, but they will get the chance to get to know other young carers, work as part of a team and learn new skills in what can be a very challenging, but fun environment.  Young carers workers tell us time and again that they see young carers blossom in these situations, and they come home more confident young people with a new perspective on their lives’.

Janice McGregor is Young Adult Carer Support Co-ordinator for the East Dunbartonshire Young Carers group and took part in a voyage with a group on board Alba Explorer in April 2016. “Life is challenging for these young adult carers and sailing with OYT Scotland has given them an opportunity to develop team building skills, enjoy time with their peers and just to have lots of fun. Watching them grow in confidence during the trip and bond as a group made all the hard work worthwhile.” A group of young carers from East Dunbartonshire will be undertaking a voyage as part of the CORAL project in April 2017.

One young carer who has benefited from sailing with OYT Scotland is Emma-May Millar. Emma-May first took part in a voyage with the Falkirk young carers group back in 2015. She loved the experience, applied for and was accepted on the OYT Scotland Young Leaders Development Programme (YLDP). She now volunteers with the Trust and comments “I want to give back to other young people, and show those who are looking after family members that there can be a life outside of caring.”

Nine young carer groups are participating in the 2017 voyages on OYT Scotland’s CORAL project. OYT Scotland will be working in partnership with the Carers Trust and their extended network, The Scottish Young Carers Services Alliance. The nine voyages will be made up of 90 young people and 18 key workers from East Dunbartonshire, Helensburgh, Sense Scotland (Glasgow), Aberdeen, Edinburgh, Falkirk (x2), Cowal and Bute, and West Glasgow.