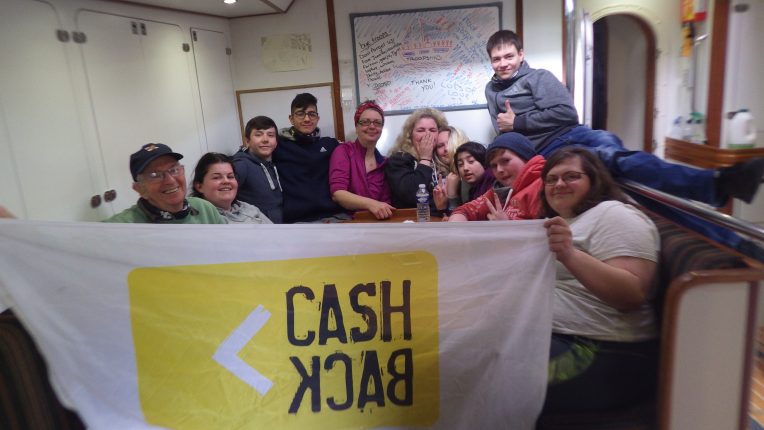 Scottish Borders are “On Course” with CashBack for Communities Funding

The young people, who come from the Connect Berwickshire Youth Project (BYP) threw themselves into the experience and worked hard to achieve the goals they set themselves. One young crew member commented that he had learned about team work and being responsible for others whilst on board, and another said that learning to cook for a big group was “a great experience” and that she now feels confident to make meals at home for her own family. “The best bit for me”, said another crew member “was getting to know the others well. I also learned new skills, including bosun’s duties. I’d love to come back and train to be a volunteer. “

The weather was mixed for the first-time sailors as they took on all the challenges of sailing the 72ft yacht, Alba Explorer. They learned to navigate and steer the boat, hoist and drop the sails, tie knots and cook for the whole crew. They sailed almost 150 nautical miles, calling in at Holy Loch, Tarbert, and Campbeltown. 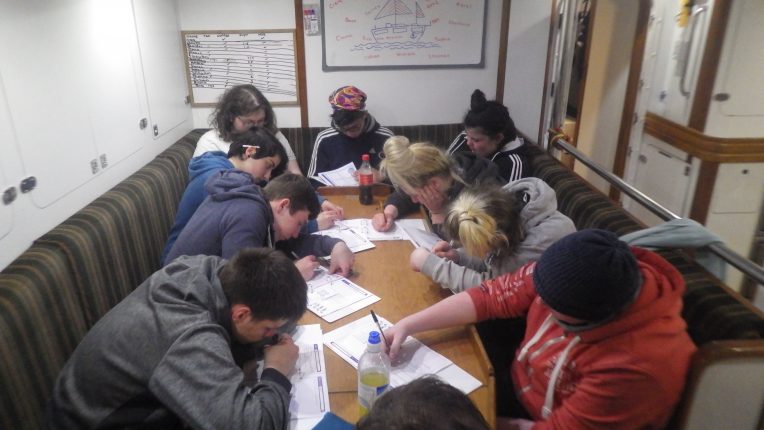 All crew members received the Royal Yachting Association’s Start Yachting Level 1 Award, and took the opportunity to complete Level 3 SQA qualifications in Numeracy, Communications, Problem Solving and Working with Others.

OYT Scotland’s “On Course with CashBack” project is transforming 288 young people’s lives over three years thanks to an award from the “CashBack for Communities” scheme – the Scottish Government’s proceeds of crime fund. Cabinet Secretary for Justice Michael Matheson said: “Through CashBack we are supporting many of Scotland’s most disadvantaged young people to reach their full potential in life, helping them to learn new skills, boost their confidence and develop as responsible citizens.”

Matheson continued: “I am delighted that CashBack has funded Ocean Youth Trust Scotland’s exceptional voyages for another year, helping young people to learn new skills, explore Scotland’s beautiful coastline and gain qualifications at the same time. We have already seen the benefits the OYT Scotland projects can have with the support of CashBack funding and I am delighted that more young people are able to benefit from this brilliant programme.”

Also taking part in the voyage were two group leaders from Connect BYP (Duns/Coldstream and Eyemouth), Shirley Jefferson and William Sinclair. Shirley is a Youth Worker, and has close connections with the group. “The young people on this voyage have come from three different areas in Berwickshire, and although they didn’t know each other at the start, they worked brilliantly as a team. They soon became friends and gained confidence, taking responsibility for tasks and each other.” William is working with Shirley as an Assistant Youth Worker, and found the voyage a useful part of his training. “It was a great experience which allowed me to get to know the young people better and build a closer relationship with them.”

Nick Fleming, Chief Executive of OYT Scotland said: “We are excited to have young people from Connect BYP as our first voyage as part of the CashBack for Communities funding. OYT Scotland voyages offer young people a life changing opportunity, giving them a chance to take part in teamwork and leadership roles. These are transferable skills that can be used in other areas of their lives. This programme aims to develop young people and the group taking part in this voyage have demonstrated that it has been a success. Our highly trained sea-staff (both professionals and volunteers) are able to get the best from each individual. The combination of engaged young people and focused sea-staff means that these young people can reach goals that they never thought possible, and giving them a new outlook on life”.