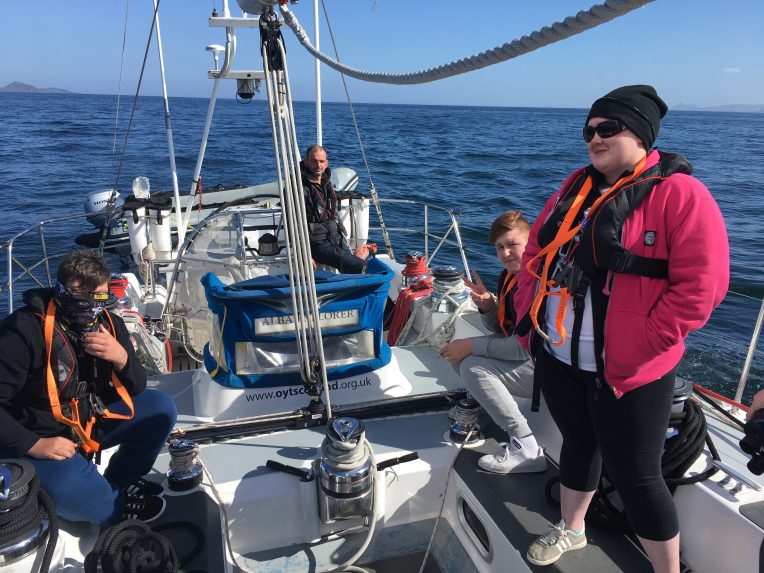 A group of eight young people from across Fife, were “happy and proud” of their five day long voyage around the River Clyde with Ocean Youth Trust Scotland which began on the 8th May. They sailed from Greenock to Lamlash Bay in Arran and back again, learning how to crew the yacht Alba Explorer and having fun at the same time. Many of the group had never met each other before the CashBack funded trip but were great friends by the end. One young person said that “making new friends was the best part!” 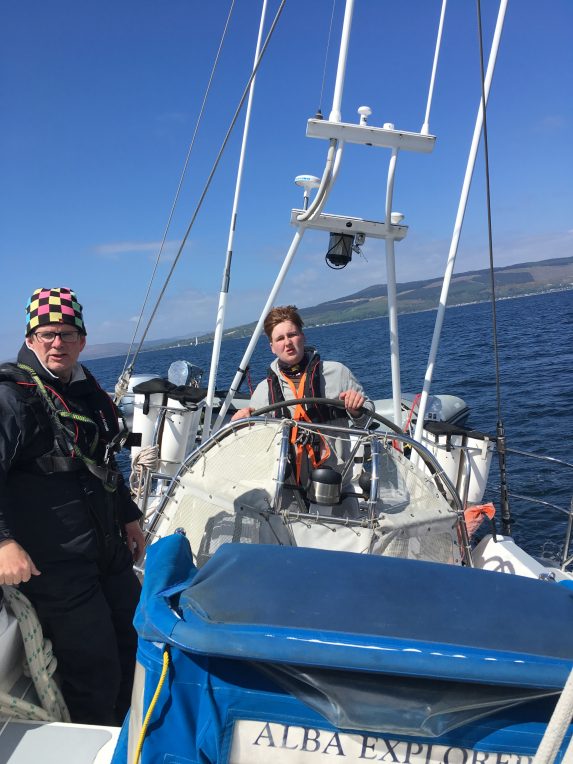 The young people threw themselves into the experience and worked hard to achieve the goals they set themselves. One crew member said “It’s an amazing time and you get a lot of laughter” whilst another stated “It was a great experience!” Some of the young people commented that the best parts were the games with the crew but that they also learned cooking skills, working in a team and taking initiative which will help them in the future.

The weather was kind for the first-time sailors as they took on all the challenges of sailing the 72ft yatch. They learned to navigate and steer the boat, hoist and drop the sails, tie knots and cook for the whole crew whilst sailing almost 107 nautical miles

All crew members worked towards gaining the Royal Yachting Association’s Start Yachting Level 1 Award, and took the opportunity to complete Level 3 SQA qualifications in Numeracy, Communications, Problem Solving and Working with Others.

OYT Scotland’s “On Course with CashBack” project is transforming 288 young people’s lives over three years thanks to an award from the “CashBack for Communities” scheme – the Scottish Government’s proceeds of crime fund.  Cabinet Secretary for Justice Michael Matheson said: “Through CashBack we are supporting many of Scotland’s most disadvantaged young people to reach their full potential in life, helping them to learn new skills, boost their confidence and develop as responsible citizens.”

Also taking part in the voyage were two group leaders Linsey Neilson and Mathew Greig. This was their second voyage with Ocean Youth Trust Scotland where they have been group leaders. Linsey said “I was delighted to be given another opportunity to sail with Ocean Youth Trust after such a wonderful experience the previous year. It’s hard to believe on the Monday morning travelling to Greenock not one young person spoke on the bus journey due to nerves, within 24 hours of the group meeting they bonded as a tight unit. It was amazing to witness young people flourish in such a short period of time and praise given to young people from watch leaders and the Skipper on board. The group are excited to come together again in the coming week to look back on their adventure, as am I.”

Nick Fleming, Chief Executive of OYT Scotland said: “We are excited to have young people from Fife as part of the CashBack for Communities funding. OYT Scotland voyages offer young people a life changing opportunity, giving them a chance to take part in teamwork and leadership roles. These are transferable skills that can be used in other areas of their lives. This programme aims to develop young people and the group taking part in this voyage have demonstrated that it has been a success.  Our highly trained sea-staff (both professionals and volunteers) are able to get the best from each individual. The combination of engaged young people and focused sea-staff means that these young people can reach goals that they never thought possible, and giving them a new outlook on life”.

Over the past 50 years, Greenock-based OYT Scotland has grown to become one of the leading sail training charities in the world. With two sail training vessels, Alba Explorer and Alba Venturer, OYT Scotland completed 55 voyages with 552 young people in 2016.