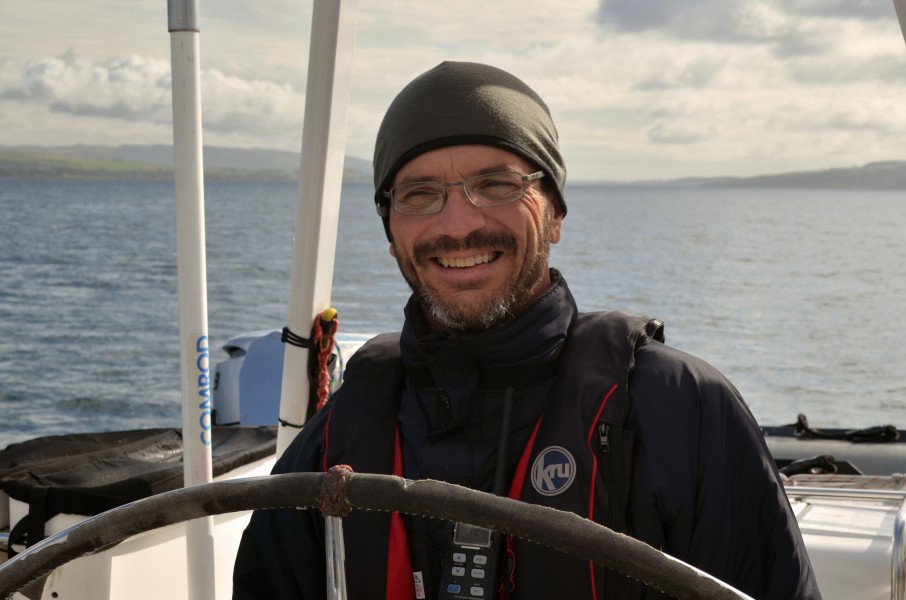 Find out a little bit more about Nick from our fun questions!

1. When did you start with OYT Scotland?

I first started with Ocean Youth Club as a Skippership Cadet back in 1990. Once I gained my Skipper’s qualifications, I did a season as relief Skipper sailing around the UK fleet, then went on to Skipper Taikoo in Scotland for 3 years. When OYT Scotland was formed in 2000 I was initially the Operations Manager for 4 years before taking on the Chief Executive role in 2005.

2. What’s your most memorable moment working with OYT Scotland?

I have been lucky enough to have sailed on hundreds of sail training voyages over the the years, all of them are special in their own way but I guess I real highlight was sailing with the Young Leaders to the Lofoten Islands in the Arctic Circle last summer and seeing a pod of Killer Whales just a few metres from the boat.

3. What’s been your best sailing experience with OYT Scotland and why?

After all these years I still really enjoy getting out on the boats and seeing how well the young people respond to the challenge of adventure under sail. I also love to see young people progressing up the ranks of the sea-staff ladder and becoming Mates and Skippers.

4. If you could sail anywhere in the world where would it be to and why?

If I could sail anywhere in the world it would be Cuba. I went there on my honeymoon and found it to be a fascinating place full of contrasts and contradictions. As far as I know they don’t have any sail training in Cuba, so I think OYT Scotland should branch out with another office in Havana!

5. What song always brightens up your day?

The song that never fails to brighten my day is “you shook me all night long” by ACDC; a rock classic that I’d love to be able to play on the guitar.

If I could be any sea-creature I’d be an octopus so that I could multi-task with my eight arms.

7. Tell us a fascinating fact about you!

Fascinating fact – I’m a volunteer crew member on the Largs Lifeboat and last year during a training exercise I got winched up from the lifeboat into the Royal Navy Rescue Helicopter. Great fun!

Help Us Deliver Our Adventures